Blasphemy and the rising tide of Islamophobia

Religious identity can prevail so much about your social and moral character. We as brown (Muslims) are always perceived as terrorists and troublemakers in developed Western countries. There are very few people who use Islamization and jihad to spread violence, hatred, and envy but not all Muslims share the same creepy characteristics. Anybody who uses religion as a means to threaten the stability and peace of people does not belong to any religion. How could you expect a good deed from an individual who has no respect for “humanity “the greatest religion for all? 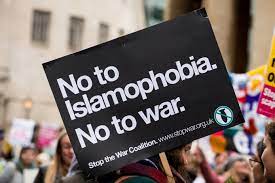 Every brown Muslim is familiar with this word which has become a popular term in ideological debate after the 9/11 attack on the twin tower. It’s simply the hatred, prejudice, and fear of people for Islam, Islamic laws, and Muslims that cause anger and fear of being harmed by a Muslim. We cannot blame every Muslim for this but some people misuse jihad and blasphemy laws in particular and Islam in general which gave rise to Islamophobia.

Affects of Islamophobia in western countries

The trend of Islamophobia these days is hindering the progress of Muslim countries especially Afghanistan and Pakistan which are among the most dangerous countries in the world. It has badly affected the lives of so many innocent people especially in Western countries where Islamophobia is on the rise. This trend has been the reason behind the destruction of mosques and the killing of people in western countries. A 20-year-old boy killed a Muslim family comprising of four members Afzal 15, Madiha Salman 44, Talat Afzal 74, and Salman Afzal 46 in Canada when they were enjoying an evening walk. Later investigations by police showed that the boy has taken online sessions that spread anti-Muslim hate. Online activities which promote hate and envy for Muslims were considered the reason behind recent mass killings like the gun attack on the Quebec City mosque in 2017 and the van attack in Toronto 2018. 49 innocent Muslims were being killed in two mosques of New Zealand in 2019. All these cases show how Islam phobia is affecting the lives of innocent Muslims who only seek peace, justice, and harmony.

Accusations of blasphemy on non-Muslims and its effects on Islamophobia

Television and print media are replete with news of killing and burning people on acquisitions of blasphemy. Blasphemy laws in Pakistan have been used to target religious minorities and people with mental disabilities, which is a curse to our nation.

Islam is a complete code of life and the ultimate message of love, care, and brotherhood.

Islam is the religion of peace, brotherhood, and love and false accusations of blasphemy on non-Muslims can harm the reputation of our religion. Our religion emphasizes the right of minorities, especially freedom of speech and worship, but killing people brutally, burning them and misuse of blasphemy laws will only make matters worse which is a reason behind Islamophobia. There are blasphemy laws for people who disrespect Islam, Quran, and Prophet Muhammad (May peace be upon him). Anybody who disrespects our religion is sentenced to death or imprisoned for his/her whole life. Facts and figures provided by National Commission for justice and peace show that there are 776 Muslims, 505 Ahmadis, 229 Christians, and 30 Hindus who have been accused of blasphemy act under its various categories from 1987 until 2018. Some non-Muslims hate Islam and try to disrespect and harm the beauty of our religion but it should be noted that there are more Muslims than non-Muslims who disrespect their own religion.

Humanity is on the edge of destruction

People in our country have personal issues and hatred for non-Muslims and they just need a chance to harm them. The current incident of Sialkot is one of the worst examples which shows the inhuman character of Muslims and misuse of blasphemy laws in Pakistan. We, torture people, set their bodies on fire, take selfies with the burning body, and still want Islamophobia to vanish. Is this what Islam and Prophet Muhammad (May peace be upon him) taught us?

Good and evil deeds are not alike. Requite evil with good, and he who is your enemy will become your dearest friend. But none will attain this save those who endure with fortitude and are greatly favored (Quran 41; 34-34)